ARRL once again is calling on its members to urge their US Senators to support the Amateur Radio Parity Act (H.R. 1301) when it comes up in the Senate during the “lame duck” session of Congress that adjourns in mid-December. The House of Representatives approved the bill in September, but if the Senate does not follow suit, the bill will die, and the entire process will have to be repeated. ARRL Hudson Division Director Mike Lisenco, N2YBB, who chairs the ARRL Board’s Legislative Advocacy Committee and has been heavily involved in efforts to move H.R. 1301 forward, said today, “The clock is ticking!”

“We begin the e-mail campaign once again, as the US Senate returns to work this week after a month-long hiatus,” Lisenco said. “We were just beginning to build momentum in the Senate following the unanimous passage of the Parity Act in the House when Congress shut down for the 4 weeks prior to Election Day.”

The National Geographic Channel has produced A Guide to Ham Radio to support its recently released digital short, Before MARS -- a prequel to its upcoming MARS series. The 33-minute prequel, which has a heavy Amateur Radio theme, provides the backstory of two principal characters in the upcoming MARS global event series.

In the prequel, twin teenaged sisters Hana and Joon Seung are the new kids in town, after their single mother relocates. In due course, they come across old ham radio transceivers -- one in an attic, the other in a thrift shop -- and use them to communicate with each other and with an older, local ham.

The Amateur Radio researcher on the film was veteran electrical engineer Michael Gilmer, N2MG, who said the producers contacted him through his connection with the eHam.net website. Patrick J. Kiger authored the online guide.

Gilmer concedes that the depictions of Amateur Radio in the production take a few liberties, although he believes that non-hams will likely overlook these and focus instead on the story arc of self-discovery and relationships within a theme of young women becoming interested in science and scientific careers.

The sisters' exposure to ham radio helps to inspire them to pursue careers in space exploration, become astronauts, and take part in a 2033 mission to Mars. MARS, which premieres on November 14, will include documentary sequences about real-life efforts to travel to and colonize Mars.

National Parks on the Air Update

With just 2 months left in the ARRL National Parks on the Air (NPOTA) program, the push for 1 million contacts from eligible NPS units remains strong. November 1 saw the 800,000th contact uploaded to Logbook of the World, breaking 25,000 contacts for the second straight week. 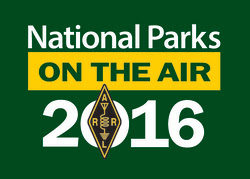 Details about these and other upcoming activations can be found on the NPOTA Activations calendar.

Beginning with the November 19, 2016 club meeting we will move to the headquarters of Johnson County REMC.  The new location is located at 750 International Drive, on the north side of Franklin.

This meeting facility will accommodate our future growth plans for MARC. The room will hold at least 200 people and has first class audio/video equipment and screen.  There are plenty of tables and chairs to facilitate the meeting and VE testing.  Their large kitchen has everything we need for Saturday morning coffee, donuts and the annual Christmas party pitch-in.

We look forward to establishing our new meeting place at the Johnson County REMC headquarters.  Talk-in will be on 146.835.  See you there beginning November 19th.

Our many thanks to Chet Aubin, CEO Johnson Co. REMC for making this possible. We will be conducting an  Introduction to APRS class on Tuesday October 4th at White River Twp Station 51 beginning at 6:30pm.  The Automatic Position Reporting System is used primarily on 2-meter radios across the country and around the world.   Practical applications include tracking mobiles, reporting current weather conditions and texting short messages from your HT or mobile radio.

Please let me know If you can attend the class.  We should have a good time learning how to play with this active/passive mode of Amateur Radio.